Connecticut at The Big E

A visit to the Connectict building on The Big E's Avenue of the States yielded some unexpected food options, including Pez and Steak-Umm, along with some others that I would expect to see at The Big E. Like all 6 of the New England states, Connecticut has its own building to showcase what makes Connecticut so special. 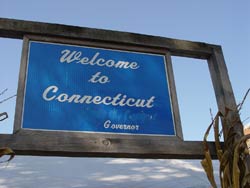 With the ongoing political turmoil in Connecticut, the state was unable to name its own governor on this sign for 2005's Big E. (John R. Rowland had resigned as governor more than a year earlier.) 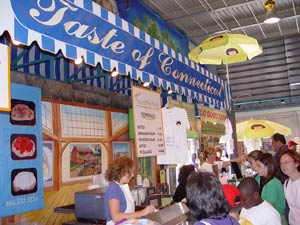 The Taste of Connecticut was a perfect match for a big fair like The Big E, as their featured offering was several flavors of fried dough from Brian's Fabulous Fried Dough. 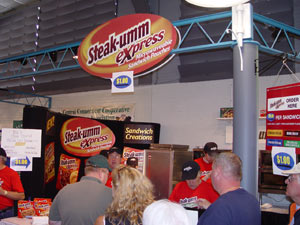 Steak-Umm was offering a choice of sandwiches for just a dollar each, hoping to promote the Connecticut-based frozen meat product. People lined up to buy them. 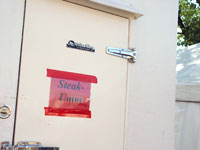 With such high demand for the inexpensive meat sandwiches, a refrigerated truck parked outside the Connecticut building held plenty more frozen lunch meat in reserve. 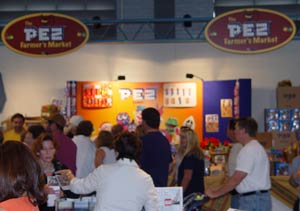 Everybody ate Pez as a kid, so the Pez store was a great place to relive those tasty memories while celebrating the Pez connection to Connecticut. 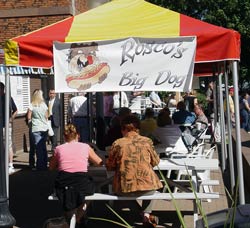 On the outside of the Connecticut building, Rosco's Big Dog of Hartford served up several varieties of hot dogs, plus its signature steamed hamburgers and cheeseburgers. 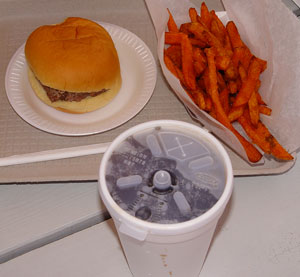 Here's the steamed cheeseburger that we got, along with a good helping of sweet potato fries. Mmmmm.