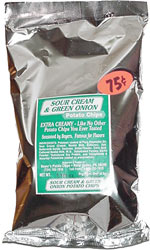 From the package: “EXTRA CREAMY — Like No Other Potato Chips You Every Tasted” ... “Seasoned by Boyer's, Famous for Flavors” ... Ingredients include “Tocopherols & Ascorbyl Palmitrate (added as preservative)”