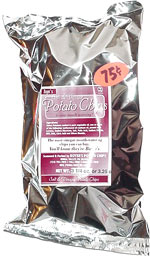 The first thing I noticed about these narrow-rippled chips was how much white seasoning powder there is on them: Lots, and it's quite visible. They do leave some powdery residue on your fingers, but not too much, as most of the white flavor powder is wedged inside the ripples. They've got a fairly strong but not overwhelming vinegar flavor.

From the package: “The most vinegar mouth-watering chips you can buy. You'll know they're Boyer's” ... Ingredients include BHT, BHA, Silicon Diacetate and Silicon Dioxide