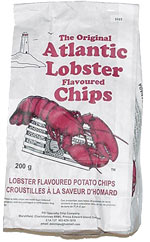 Taste test: The film crew from cable channel NECN/Worcester News Tonight was eager to try these when they saw the bag.

From the package: “These potato chips are made from selected potatoes and are packaged in a PEI potato bag” ... “Produit du Canada” ... “Freight shipping”

This snack was discovered by Michelle Maher. Review published .