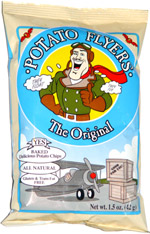 Taste test: These chips are an unusual combination of several things.

They're shaped sort of like Fritos Scoops (but they're not made from corn at all), except thicker. They taste kind of like Pringles, except they're vastly thicker. They have the consistency of many styrofoam-like Asian snacks, except that these are crunchier. Pretty good.

Smell test: Much different from regular potato chips. Sort of like Pringles.

From the package: “Potato Flyers are potato chips from potato and rice which fly at the speed of sound as they are popped into these tasty shapes. ... Potato Flyers are not only delicious, but they're also extremely low in fat. The pilot and the seaplane represent the freedom of flight as well as the freedom of fear, and the advancement of personal exploration. When you eat these chips, think of something you've never done and would like to try, and then get really good at doing, something really good.” ... “95% Fat Free Potato Chips”