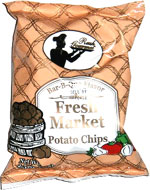 Taste test: They chips, with wide ridges, have a slight BBQ flavor.

There's a hint of sweet BBQ sauce, but it ends up more salty. If you're looking for a good BBQ chip, this won't do it for you.

From the package: Nothing. But given as they're branded as Rush Gourmet, maybe they were in a hurry.

This snack was discovered by Keith and Melissa at Wal-Mart. Review published March 2002.