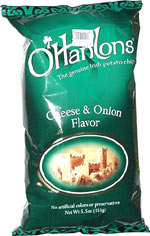 Taste test: These are excellent cheese and onion chips.

Great onion flavor, just enough cheese. Everyone who tried these though that they were great.

Smell test: Kind of oniony, not in a good way.

From the package: “O'Hanlon's of Ireland: Nestling in the historic County Armagh, built on land trodden by the ancient Kings of Irelamd. The castle, built in the early 17th century, was the ancestral home of the O'Hanlons, a powerful Irish clan. Over the centuries the castle has seen many changes. Home to American troops during the Second World War, the last 40 years have seen it used to produce potato chips, including Ireland's famous Cheese & Onion flavor.”

This snack was discovered by Jeremy at Christmas Tree Shops. Review published April 2002.