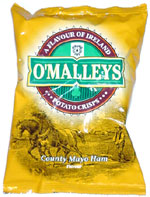 You can kind of taste bacon too, we're in that same pork-like flavor. I thought I would be disgusted by this, but these are kind of addicting and tasty. The chips aren't that greasy ever, so it doesn't overpower the ham powder.

From the package: “Seamus O'Malley was a tavern owner from County Waterford who had a problem with roudy patrons when he ran out of crisps. If the roads were closed and crisp deliveries became impossible, so did the locals. He figured if he could create a crisp of his own he would no longer have to rely on deliveries. Wit the help of his wife's renowned cooking talents, he set about solving his problem. The results of these efforts led to a mouth watering range of tantalising crisps. Needless to say, his plan was a success. The locals were happy and the O'Malleys brand became famous. Unfortunately, for poor old Seamus, he still runs out of crisps... only now it's because they're so tasty!”