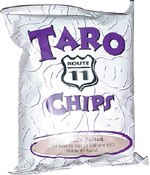 Taste test: These chips, made from Taro, are definitely unusual, and they're pretty good, though not terribly flavorful.

They're light in color, with dark purple spots and streaks. It's a big change from the taste of your standard potato. Some of the chips are quite large or even enormous. They're light and fairly crunchy in general, but it seems to vary from chips to chip: some are very crisp, while other seem to be moister and have a harder crunch.

From the package: “The best things in life are still made by hand” ... “A very distant and tropical cousin of the potato, half of the world depends on the taro root as a staple food. The other half ot the world has never even heard of this strange root. This 'jungle potato' is native to southeast Asia, and in one variety or another has spread to the Caribbean, South America, Central America, Africa, the Pacific Islands and East Indies. ... The Hawaiian Islands, thick with taro, are home to many mom-and-pop taro chip factories. In the spirit of those mom-and-pops, we bring you Route 11 Taro Chips”