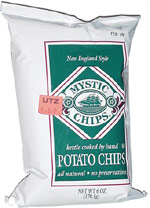 From the package: “The potato chip was invented in 1853 by George Crum, a Native American. Responding to a customer's complaint that the French fries were 'too thick,' Crum sliced a batch of potatoes, fried them to a crisp in lard, sprinkled them with salt, and sent them back to a delighted Cornelius Vanderbilt. An original American food had quietly been discovered at a time when shipbuilding was an active industry in maritime America. Nearly 200 years later, the original New England Potato Chips is back. Mystic Chips® made their maiden voyage at Mystic Seaport, America's leading maritime museum, where a 19th-century village of historic buildings and tall ships recreates the era when George Crum salted his first potato chip.”

This snack was discovered by Jeremy.