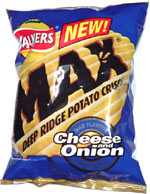 Quite thick and crunchy, good ridges, with a subtle toasted onion and cheese taste. Despite onion's second billing in the name, it has a stronger taste than the cheese. I was impressed by how many chips Walkers put into the bag. Even more impressive was the fact that the thick, strong chips were largely unbroken, having survived after a harrowing voyage in a chip box aboard two London Underground lines, a trans-Atlantic flight, baggage claim conveyor belt, Logan Airport shuttle bus, and then Boston's Blue Line, Green Line and Red Line.