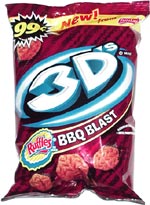 They taste is best if you eat a whole bunch of them, as the taste of just one is fairly bland, but it grows as you eat more. I'm not really sure what makes these Ruffles, as I consider a Ruffle to be a rippled potato chip, but these aren't really potato chips at all. Their shells seem to be thicker than those of Doritos 3D's. Another opinion: I think these are the best-tasting of all the Ruffles 3Ds that have come out. The taste isn't as strong as in the other brands (sour cream & onion, cheddar), which goes well with the potato puff-type snack.

This snack was discovered by Jeremy in Somerville, Massachusetts.