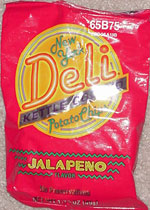 Quite hot (a delayed hotness), but not the hottest ever. Chips were pretty small, though, so it was hard to tell that they were even kettle chips.

Smell test: Very jalapeñoey, but not as strong an aroma as Poore Brothers jalapeno chips.

From the package: “Your order's up! There's nothing better than noshing at a real New York Deli, and our chips are definitely no expection! Extra crispy and crunchy, the kettle cooked chips have that hearty flavor you'd expect from your favorite deli. You could almost say they were made to order!” ... “New York Deli® Potato Chips — the best of New York in a bag!”