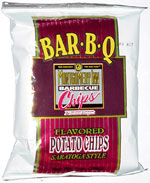 Taste test: These are unlike any other barbecue chips I've ever had.

First, they're incredibly thick, with a great crunch. But even more noticeable is the amount of flavor powder on the chips — it's piled on thick, everywhere, like you wouldn't believe, and like I've never seen, giving them lots of great barbecue taste. Beyond that, some of the chips are huge, and they're all unbroken.

From the package: “RIBS KING Barbecue Sauce is a Cincinnati original, served at the renowned Montgomery Inn Restaurant. A Cincinnati land-mark for over 30 years, the restaurant was established by Ted Gregory, the “Ribs King". The recipe for Ribs King Barbecue Sause, the heart of Montgomery Inn's acclaim, is known only by Ted's wide, The “Ribs Queen". The ingredients that make RIBS KING Barbecue Sauce the world's greatest remain a closely-guarded family secret — a secret not even the “King” knows!”

Trivia: These chips have more flavor powder on them than any chips I've ever tasted.