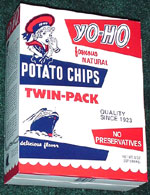 Taste test: These are fairly ordinary potato chips, but the packaging was unusual enough to turn quite a few heads around the chip bowl.

These chips come in a box (roughly the size of a box of cereal) that looks like something out of the 1940s, containing two clear bags of potato chips. The chips were kind of greasy and pretty salty but had a lot of potato flavor.

From the package: “Legend of the Potato Chip: Created more than a century ago, the chip came into existence purely by accident. The setting was Moon's Lake House Restaurant in the fashionable resort town of Saratoga Springs, New York in 1853. A frequent patron to this particular restaurant was none other than Commodore Cornelius Vanderbilt who made his fortunes from the railroads. One evening, the Commodore demanded that his fried potatoes be sent back to the kitchen, because they were too thick for his taste. The chef, an American Indian named George Crum, was equally as huffy, and never one to be undone by criticism, he plotted revenge. Crum viciously sliced up a new batch of potatoes paper-thin, tossed them into a vat of boiling oil, and fished them out when they were fried to a crisp. Then he salted them and gleefully served his dish to the muttering Commodore. But Crum's counter-attack missed its mark. The Commodore loved the crunchy potato slices and so did his friends. Soon Saratoga Chips, as he called them, were the delight of the resort's socialite patrons, and the potato chip was 'born.' ”

This snack was discovered by Jeremy at Adventures, Framingham, Massachusetts.