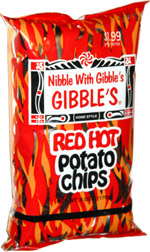 Taste test: These chips weren't all that popular with our tasting panel.

They have a much different texture than most chips, which could be a result of the lard that was used to make them. They're kind of hot but not that hot, and they really don't taste that good.

From the package: Ingredients include “Prime Processed Lard” and “Solica Gel added as an anti-caking agent.” ... “Red Hots are not for everyone. They're for a special group of Red Hot lovers who are really H-O-T S-T-U-F-F! Research has proven that individuals believed to be the coolest under fire are at the greatest risk of becoming Gibble's Red Hot Lovers!”

This snack was discovered by Christine in Carlisle, Pennsylvania.