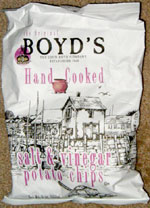 Taste test: These are good.

They're not too vinegary, almost like a sweet vinegar. Not as oily as Cape Cod vinegar chips. It's a very strong vinegar tatse when you start eating, but by the end it faded away, and it's kind of a nice effect.

From the package: “Way back in 1853, Cornelius Vanderbilt was vacationing in Saratoga Springs. One day at lunch he felt that his sliced potatoes were not crispy enough. The chef, George Crum, was not amused. He sliced potatoes thin and fried them in oil before sending them back. Mr. Vandelbilt loved the thin spuds and soon “Saratoga Chips” were the rage. John Boyd followed this recipe in another resort town — starting Revere Beach Chips on Boston's North Shore in 1868. John Boy's company is still poducing hand crafted potato chips, making Boyd's the world's oldest snack food company. Boyd's Hand Cooked Potato Chips are made with this same commitment to New England quality and tradition that John Boyd started ... hand cooked in kettles for a hearty flavor and bite.”

This snack was discovered by Keith and Melissa at Star Market, Stow, Massachusetts.