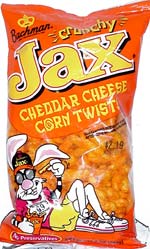 Taste test: These are quite a bit like Crunchy Cheetos, but most people who tried them thought that these were clearly superior in taste.

These seem just a little bit less crunchy than Cheetos, but that's not to say they're not crunchy, because they are quite crunchy. Overall, these are some of the best crunchy cheese curls on the market today.

Smell test: A somewhat pungent cheese smell ... not the most pleasant aroma out there.

From the package: “We're live here on pit road at Pretzelvania® Raceway where the Bachman Jax Rabbit has just pulled in for a quick stop. Let's see what he has to say.

Jax ... How's the race goin'? My feet are runnin' fast today. Those high long leaps play havoc on the treads and the bugs are bummers when you're movin' at over 45 mph, but my Bachman crew is on top of it.

What's your strategy for the rest of the race, Jax? Fuel is critical. Our new reformulated Bachman Jax Crunchy is cheesier than ever. It's gonna give us the edge. ...”

This snack was discovered by Jeremy at Star Market (formerly Shaws, and Star Market again before that), Porter Square, Cambridge, Massachusetts.