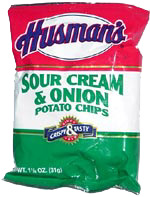 They've got a mild taste, with a toasted onion flavor and just a hint of sour cream..

Smell test: Not really sour cream and oniony, though maybe a bit oniony.