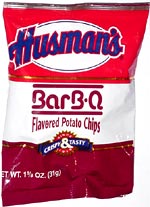 They're fairly sweet, but also quite salty, with no heat to them. The chips have quite a bit of barbecue seasoning on them.