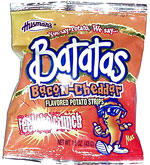 They're thicker than ordinary potato chips, and the're uniformly 5/16 inch wide. The length varies from about 1/2 inch to about 2 inches, depending on which part of the potato a particular strip came from. Many of the strips have potato skin showing at one or both ends. The bacon flavor dominates the cheddar. There's a nice crunch to these, and they're pretty good.

From the package: “Max says that when it comes to snacks, 'Don't say potatoes ... say Batata's'. That new in your face snack that lets you FEEL THE CRUNCH, with each munch. Wave bye-bye to those look alike, taste alike snacks that leave you feeling empty inside and say hello to that new, cool dude snack ... Batata's. This totally cool snack lets you FEEL THE CRUNCH when you munch. Whether you munch one at a time or munch by the bunch, you feel the crunch that gives you that greater tater taste. Max says that Batata's are the fun snack to eat anytime when you have the urge to munch. Whether it's original Batata's or seasoned Batata's, anytime is the right time to FEEL THE CRUNCH!”