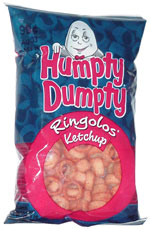 Taste test: These are OK, but just OK.

They're much less ketchupy than I had hoped. The problem is that the Ringolos — thick rings molded from processed potato — have too much substance to them in proportion to the amount of flavor powder. Once you start crunching on the rings, the potato taste vastly overpowers the ketchup. The BBQ flavor Ringolos have a similar issue.

From the package: “Got a taste for more? With Humpty Dumpty there's more for you. From Party Mix to Cheese Sticks, Potato Chips to Popcorn, Ringolos to Nachos, and everything in between, you'll love love Humpty Dumpty more with every mouthful.”