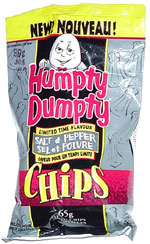 Taste test: These are pretty good.

There's a nice pepper taste to them. They're a little greasier than the Utz Salt & Pepper, but these are not bad.

From the package: “Limited time flavour” ... “Got a taste for more? With Humpty Dumpty there's more for you. From Party Mix to Cheese Sticks, Potato Chips to Popcorn, Ringolos to Nachos, and everything in between, you'll love love Humpty Dumpty more with every mouthful.”