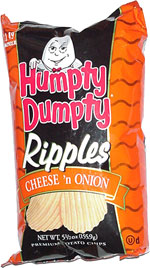 Taste test: These have sort of a toasted onion taste, without very much cheese flavor to speak of.

I was hoping for a lot more cheese taste. They're OK but not great.

Smell test: Kind of oniony, but not sweet onion. Not that good.

From the package: Ingredients include cheddar cheese powder, onion power, garlic powder, yellow #5 and yellow #6 ... “Got a taste for more? With Humpty Dumpty there's more for you. From Party Mix to Cheese Sticks, Potato Chips to Popcorn, Ringolos to Nachos, and everything in between, you'll love love Humpty Dumpty more with every mouthful.”