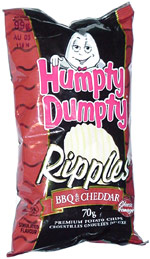 Taste test: These are nothing special.

The barbecue taste isn't that good, and the cheddar taste isn't either. The underlying chips is nice, though — wide ridges, very crispy

From the package: “Made with real cheese/Fait avec du vrai fromage” ... “Simulated flavour” “Got a taste for more? With Humpty Dumpty there's more for you. From Party Mix to Cheese Sticks, Potato Chips to Popcorn, Ringolos to Nachos, and everything in between, you'll love love Humpty Dumpty more with every mouthful.”