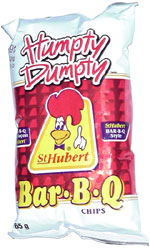 They're quite tasty at first, with a mixture of sweet barbecue and mild spices, and then they've got an aftertaste with just enough kick so that you can remember what you just ate for a while..

From the package: “Humpty Dumpty makes sure its chips are thinly sliced and bursting with natural potato taste, giving you 'the perfect flavour every time'. Keep your eyes open for new flavours at your local store — you'll never know when we add another! After all, when it comes to potato chips, Humpty Dumpty is the Flavour King!”

Trivia: St. Hubert is a chain of chicken restaurants in Canada, a country known locally as "Canadia"