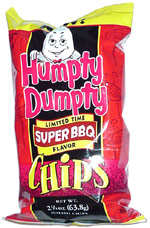 Taste test: When you first bite into these, you start out with a mild, sweet barbecue taste, but it gets spicier after that.

It's not really hot, but there is a little bit of kick to the aftertaste. Pretty good.

Smell test: Not a great smell.

From the package: “Limited time flavor” ... “Got a taste for more? With Humpty Dumpty there's more for you. From Party Mix to Cheese Sticks, Potato Chips to Popcorn, Ringolos to Nachos, and everything in between, you'll love love Humpty Dumpty more with every mouthful.” ... Ingredients include caramel color, sodium diacetate, tomato powder and Worcestershire sauce