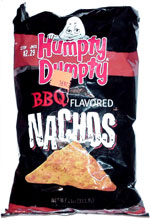 Taste test: These are great chips.

It's unusual to find anyone selling barbecue flavored nachos, and Humpty Dumpty really scored big with this recipe. They're got a teriffic, tasty barbecue flavor that's just flavorful enough, without overdoing it — just an all-around great chip.

Smell test: Nice aroma, but it's hard to describe. Not really barbecuey, but not really cheesy either.

From the package: “Give your buds a blast of nacho nitro Humpty Dumpty style. Toasted Nachos Tortilla corn chips crammed with crunch and ferocious with flavor. For Nachos Tortilla Chips with take-no-prisoners taste, go for Humpty Dumpty. Go for more.” ... The dot of the “i” in “pizza” is colored with stripes like an Italian flag ... “Artifically flavored”