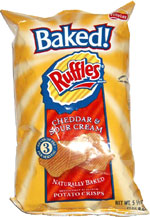 Taste test: These are pretty good. They've got a good, mild cheddar flavor to them, and they're sort of addictive, in a Pringles sort of way.

Speaking of Pringles, don't let the familiar "Ruffles" name fool you into thinking that these are potato chips — they're definitely not. They're processed from dehydrated potatoes and various other ingredients and then molded into sort of a hexagonal shape. It's not a sliced-up potato by any means. And, compared to the non-baked Ruffles Cheddar & Sour Cream, these are definitely less flavorful. Still, not a bad snack.

Smell test: Not a bad aroma, kind of mild, hard to describe, but it does not smell like potatoes.

From the package: “Guaranteed fresh or this bag's on us.” ... Ingredients include cheddar cheese and blue cheese.