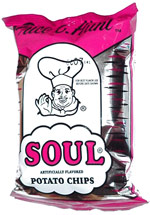 Taste test: The best thing about these chips is the surprise that you get when you open the bag: it doesn't say anywhere that they're ripple chips, but it turns out that they are.

From the package: “Say no! to drugs” ... Ingredients include extractives of spices, annatto and paprika

This snack was discovered by Jim O'Brien (but not the basketball coach).