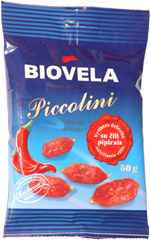 Taste test: This bag contained a plastic tray filled with smallish pieces of meat, shaped sort of like hard candy.

There was no wrapping on each individual piece of meat other than the edible casing. They tasted pretty much like salami, with a bit of a mild kick in the aftertaste. The meat was very dry, but still tasty.

This snack was contributed to Taquitos.net by the manufacturer. Review published November 2008.