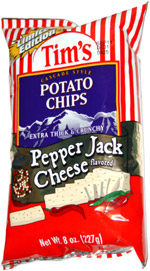 Taste test: These potato chips were cut thick and generally very wiggly, with many chips folded over.

They had a pale mustardy yellow color, with just a little flavor seasoning visible. There was a great crunch, and most of the chips were quite loaded with flavor, a nice mix of cheese and spices with a spicy afterataste. The distribution of flavor was not perfectly even, as some of the chips tasted more like plain (thought very crunchy) potato chips. These were excellent.

From the package: “Just like the mountains that surround us, we have risen to the challenge of creating another great tasting chip. We have created the perfect balance of real potato flavor and topped it with the creamy spicy taste of Pepper Jack. A product of Monterrey Jack, we combined spicy peppers with a flavor that flirts with your taste buds for that zesty, warming flavor. We've proven that a chip that crunches louder, tastes superior and satisfies better when it's prepared by people who take pride in a well made snack.”

This snack was contributed to Taquitos.net by the manufacturer. Review published August 2008.