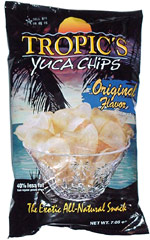 Smell test: It's a much different smell than potato chips, but it's not bad.

From the package: “Yuca? (also known as cassava) This tropical vegetable of the Caribbean is known for its fibrous roots, rich in carbohydrates. Yuca has always been a major food source for the natives of Brazil, Colombia and Venezuela, where it originated. Spread throughout the tropics in the 1500's by European explorers, yuca now provides nutrition for more than 750 million people. Our specially selected yuca variety is hand planted in organically enriched earth and harvested when mature ten months later.”