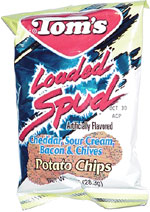 Taste test: A rippled chip, these are supposed to taste like a baked potato, but once again the cheddar taste is the most powerful taste.

We think Ruffles The Works chips do the flavor a bit better. Once again, having cheese on a rippled chip works here. And the first bite really does give you a strong sour cream flavor.

Smell test: Tough smell, but they do smell cheddary. They smell like Waffies.

From the package: “Tom's Foods Delicious Ripple Chip now comes loaded with the great taste of Smoked Bacon, Sharp Cheddar Cheese and Fresh Sour Cream! So load up for your next party, or for just hanging around with loaded spuds!”

This snack was discovered by Keith and Melissa in Clifton Park, New York.