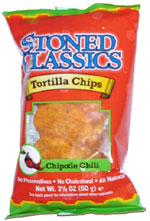 They take some getting used to, because the chipotle taste is so unusual for tortilla chips. But it's a nice twist to use chipotle as a flavoring for these.

Smell test: Kind of a strange smell, but not bad.

From the package: “Many moons past, the ancient Aztecs slowly cooked corn with fresh lime. Once the corn became soft, it was ground with a rock mallet in a stone bowl until it became masa dough. They then formed it into circular shapes for dipping or filling. The final result was a uniquely flavored chip or 'tortilla' as the Aztecs called it. Keeping in the Classic Foods' tradition, we have recreated these methods of cooking and present you with Stoned Classics™. Stoned Classics™ have a distinct texture and robust flavor.”