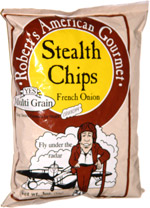 Taste test: These beige chips were shaped like equilateral triangles, but extremely wiggly, which made them look similar to some soy chips.

Most of the chips were broken down into much smaller pieces, and upon looking into the bag at the wiggly broken pieces, I was expecting these would not be good. Upon biting it in, I was surprised by the very crisp and light texture of the chips, along with a delicious flavor, quite tasty. It was like the flavor of onion soup on a chip, very rich and hard to stop eating. These were very popular around the chip bowl.

Smell test: Not much, but maybe the slightest hint of onion.

From the package: “Top Secret Foruma for Healthy” ... “Fly under the radar” ... “Stealth Chops are delicious, thin chips specifically designed for today's healthy lifestyle with a multigrain formula. Stealth Chips are baked and formed into a great dipping chip, that is also great for munching.”

This snack was discovered by Keith at Shaw's in Worcester, Massachusetts. Review published .