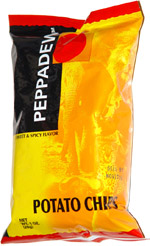 Taste test: These thinly sliced potato chips were very crisp and quite spicy, with a sharp and tangy flavor that was also fruity and sweet, and included a bunch of heat.

The taste was not anything like any of the usual potato chips flavors, a bit jarring at first, but a nice taste for those who enjoy hot chips..

Smell test: Very tangy, sweet, fruity smell, kind of like that red sauce that comes with sweet and sour chicken.

From the package: “Peppadew™ fruit, like the animals pictured on the front of this package, was born wild in South Africa not so many years ago. The Peppadew™ fruit, the essence of this exciting new Sweet and Spicy flavor, was discovered by J.S. (he prefers to remain anonymous) while he was tending to his garden in the Eastern Cape of South Africa. Upon finding this bush, with hundreds of little red fruits on it, he did some research and found it was truly a new species of plant. In fact, it was his newest discovery since the Kiwifruit — some 30 years ago. He gave it the name Peppadew™— spicy like a pepper but tantilizing as the Dew.”