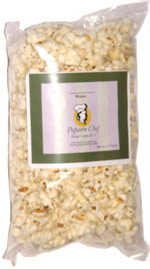 Taste test: This popcorn had generally smallish kernels, and a careful look at the kernels revealed some tiny green spots on them.

They did have a wasabi taste, but the amount of wasabi heat was fairly negligible, a far cry from Eden's wasabi chips or any of the various wasabi-covered peas on the market. So the wasabi flavor might be good for people who just like the taste of wasabi, but overall the lack of heat made this popcorn quite disappointing.

This snack was contributed to Taquitos.net by the manufacturer. Review published November 2006.