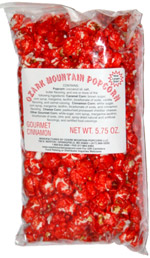 Taste test: This bag of popcorn had the same color and brightness level as Dorothy's ruby slippers.

The red glaze had a pretty good cinnamon taste, not a hot cinnamon at all, and not overly sweet either. The sugary coating didn't leave any residue on the fingertips. Some cinnamon heat would have made the taste more interesting, but this was still pretty good popcorn.

From the package: “New Larger Size!”

This snack was contributed to Taquitos.net by the manufacturer. Review published January 2007.