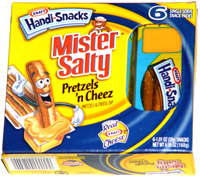 Taste test: This box contained six individual packages, each with eight pretzel sticks and a tub of cheese for dipping.

The weird thing was that the outside package was clearly branded as Mister Salty, complete with two different depictions of the Mister Salty mascot, but the six single-serve packages inside were labeled as just Kraft Handi-Sancks, with no sign of Mister Salty anywhere on the package. The pretzel sticks were fairly thick but didn't have a whole lot of salt on them, which was kind of shocking, given the Mister Salty connection. The cheese dip was sort of an American cheese and was very soft, almost liquidy. When dipping the pretzel into the cheese, the taste was quite acceptable, though certainly nothing fancy.

Smell test: On the cheese side, a strong but unimpressive cheese smell. Not a very good pretzel smell on the pretzels side.

From the package: “Dipping fun! Grab one and go!”