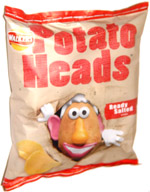 Taste test: These potato chips had narrow ripples and a fairly thick cut, with a high level of crispness and a very nice crunch.

For this type of ripple chip, you usually get much less crunch. The level of saltiness was fairly low, but the potato flavor was fresh and tasty. The art on the bag showed Mr. Potato Head ripping a hole to escape from a bag of potatoes.

From the package: “Potato Heads are delicious crinkle cut crisps, available in a range of fantastic flavours. They also contain • No artificial colours, flavours or preservatives • 33% less saturated fat • 33% less total fat • Under 110 calories per 23g pack on average.” ... “Mr. Potato Head and Potato Heads © Hasbro 2005. The use of these names and their logos and character concept are licensed by Hasbro.”

This snack was discovered by Jeremy in London. Review published September 2006.