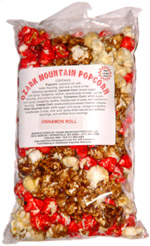 Taste test: The popcorn in this bag came in three colors, with some white pieces, some bright pinkish red cinnamon pieces, and some your standard caramel corn color.

At first I thought that the colors corresponded to different flavors, but after eating a few, I wasn't so sure. The white ones seemed to have a vanilla flavor. Couldn't tell whether the red ones or the brown ones — or neither, or both — were the cinnamon onesk, as the flavor seemed to vary from one kernel to the next. But overall, there was a mild cinnamon flavor. With the bright red color, I was sort of expecting a hot cinnamon flavor (like Hot Tamales candy) but there was nothing like that.

From the package: “New Larger Size!” ... The bag listed separate ingredients for each kind of popcorn included, with lists for Popcorn Caramel Corn, Cinnamon Corn, Cheese Corn and Other Gourmet Corn.

This snack was contributed to Taquitos.net by the manufacturer. Review published December 2006.