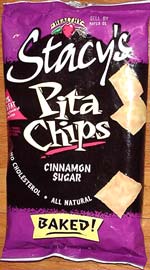 Taste test: These are sweet and crunchy — a nice dessert chip.

The amount of cinnamon sugar varies a lot from chip to chip, so the sweetness and dryness of these is all over the map. They could stand to be a little bit thinner, so that there's more sugar in proportion to chip, because once your tongue has absorbed the sugar, there's still some crunching left to do, but the remaining flavor is like a dry cracker.

From the package: “Perfectly sweetened with a sprinkle of natural milled cane sugar and a touch of cinnamon. A chip that's both decedent and delicious.” ... “Everyone asks, 'How did a social worker and a psychologist, fresh out of graduate school, get into the gourmet snack business?' ”