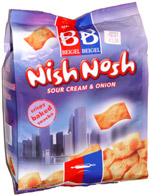 Taste test: These thin, cracker-like snacks had sort of an S-curve in their shape, and they were crisp and tasty, with a nice crunch and a good sour cream and onion flavor.

They were very popular among our tasters. Unfortunately, most of the pieces in the bag were broken into two or more pieces.

From the package: “Beigel & Beigel was founded in Poland in 1880, by my ancestors who were busy baking and perfecting soft golden bagels.”