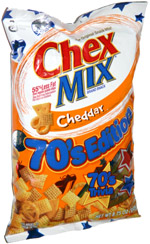 Taste test: This mix included small round and knottled pretzels, isosceles triangular cheddar cheese crackers, and Corn and Wheat Chex, some fairly plain and some infused with lots of cheese powder.

It was quite a good mix, as the pretzels were quite small but crisp, the crackers were thin, cheddary and very good, and the cereal had a nice light crunch and great crispness. It was easy to spot which cereal pieces had the most cheese, so you could pick the cheese level to suit your taste. From the looks of the bag, I was expecting more of a 70's-themed snack, but the whole 70's thing seemed only to refer to the very easy trivia questions on the back of the bag. All of the snack elements of the mix were crisp and fresh, and nothing tasted like it had been sitting around since the 70's.

This snack was discovered by Keith and Melissa at Target. Review published July 2006.