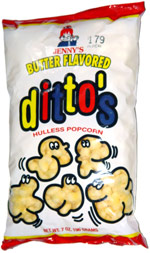 Taste test: These snacks had a shape that was sort of a cross between a cheese puff and a piece of popcorn, irregular and a bit wiggly, with most pieces just slightly smaller than your typical popcorn kernel.

Unfortunatelty, they didn't have the texture of either a cheese puff or popcorn, but instead they had a very styrofoam-like texture. The butter taste was pretty good, but the texture was not good, so these had no fans around the chip bowl. Either a crisp popcorn texture or a melt-in-your mouth cheese puff texture (like Jax) would have been far better.