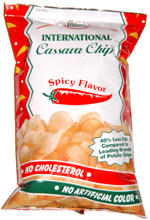 Taste test: It was really tough to get this bag open.

Almost impossible. Eventually I decided it was hopeless to try to pull it open, so I gave up and used scissors. Once I got into the bag, I found that the chips were very crisp and also brittle upon biting in, with a nice tangy flavoring on them. There was no heat in the initial taste, but there was a slightly hot aftertaste that seemed to keep growing hotter in the back of the throat. These were much better than the Original variety of Indies Cassava chips.

Smell test: OK, maybe just a little bit of spice to it.

From the package: “40% Less Fat Compared to Leading Brands of Potato Chips” ... “No Cholesterol” ... “Indies Internatiuonal Cassave Chips are created by combining an exotic taste of the tropics with savory seasonings of the world. Cassava has twice the fiber of regular potatoes and naturally absorbs less fat. The result is a crunchier and healthier alternative to regular potato chips.”