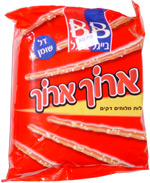 Taste test: These pretzels sticks lived up to their name, as they were quite a bit thinner than any other pretzel stick we've tried.

They were also impressively long, at about six inches each. They were crisp and had some good pretzel flavor, with a small amount of salt, but still fairly dense in salt considering how thin the pretzel sticks were.

This snack was discovered by Amitai in Israel. Review published March 2006.