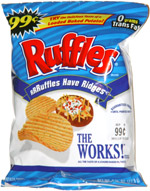 Taste test: These are another alternative to the old-fashioned Ruffles sour cream and onion chips.

This snack was discovered by Keith at Stop & Shop.