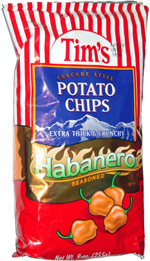 Taste test: These chips had the same thick cut and extreme crunch as the other Tim's chips, with an intense Habanero flavor featuring a delayed heat.

I've eaten hotter habanero chips, but these were quite tasty, with a good mix of potato and habanero tastes. The heat grew more intense by eating several chips in succession. Our tasters emptied this large bag in near-record time.

From the package: “We've been cooking our potato chips in the shadow of the Cascade Mountains since 1986 with an old family recipe. With your first satisfying crunch, followed by the real flavor of premium potatoes kettle cooked then perfectly seasoned, we think you'll agree that you have found what you've been looking for. Some say Habanero is the hottest pepper in the world. We know it makes the hottest snack! Than you for buying Tim's. And remember, never Habanero without water or your favorite drink nearby!”

This snack was discovered by Jeremy at Albertson's. Review published .